Immense Power............
Hi guys, well yesterday I spent over ten hours putting together and painting this dam thing so I would have another fully painted piece to field at the start of the progressive campaign at my local games club, I had to leave the tech for another day as my eyes and back were knackered after that!.

The model itself is ok and quite easy to put together, the finecast isn't too bad although two of the rim's on the track wheels were so thin they just fell away, not good!, I didn't need much green stuff which was a good job as I hadn't the time to let it dry, I painted it in eight parts before gluing together, the two tracks, side panels and lower cog plates that hold the gun, the main body with rear supports and the main gun.
For speed (LOL) I used GW's black and white spray undercoats and Army Painters demonic yellow undercoat, I find the AP's demonic yellow great for my Scythes it speeds painting yellow up a great deal.
Painting the TFC itself is straightforward enough there's loads of metal parts so I just tried to keep it neat and add the detail such as lenses ect afterwards.

As for its immense power, it gave me first blood wiping out a unit of 14 Termagant's in one pop! in my first round of shooting, it also did this again in another round and also kept a couple of units moving slow using subterranean blast in two other rounds, to say the thing was a beast is an understatement and was well worth putting the effort in to get it painted!.

Anyhow guys here's a few pic's hope you like it. 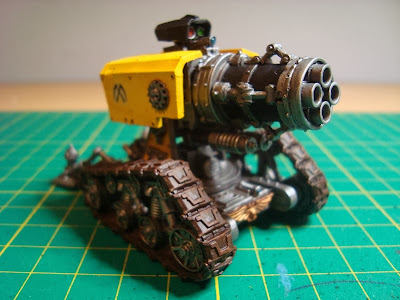 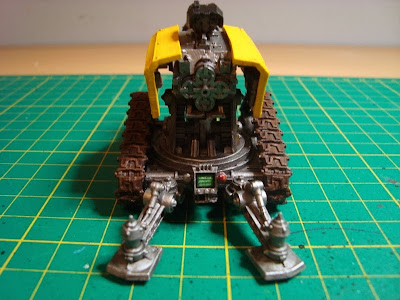 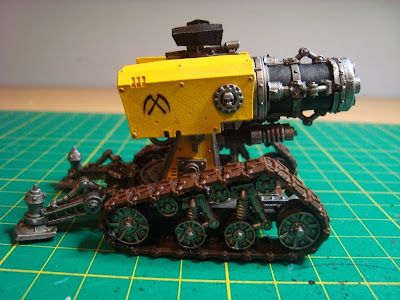 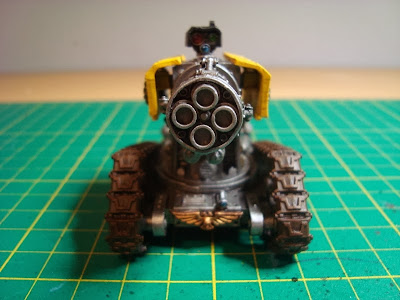