Right then here I am just starting out in the hobby building and painting mini's of my chosen chapter and BOOOOOOOM!!! take that! your mini's are no longer legal or at the very least are going to look sh!t due to different base sizes your Tac sized models will be stood on.

Got to say Games Workshop "WHATS THE POINT LADS!!", the third partie base makers wont be put out of business if that's what your thinking, they will catch up, the only people your pi55ing on is your customer base AGAIN!!.

Sorry for the rant guys but WTF!, I feel for you guys who have large collections, will they still be legal for tournament play?, how do you feel about re-basing your entire army or if its even possible.

Well then guys I picked up this nifty little hobby related item a few days ago with a view to using it on my models exhaust vents, in the past I've just dry brushed black which is fine and works well but I'm always up for something new and I've found this product to be rather good. 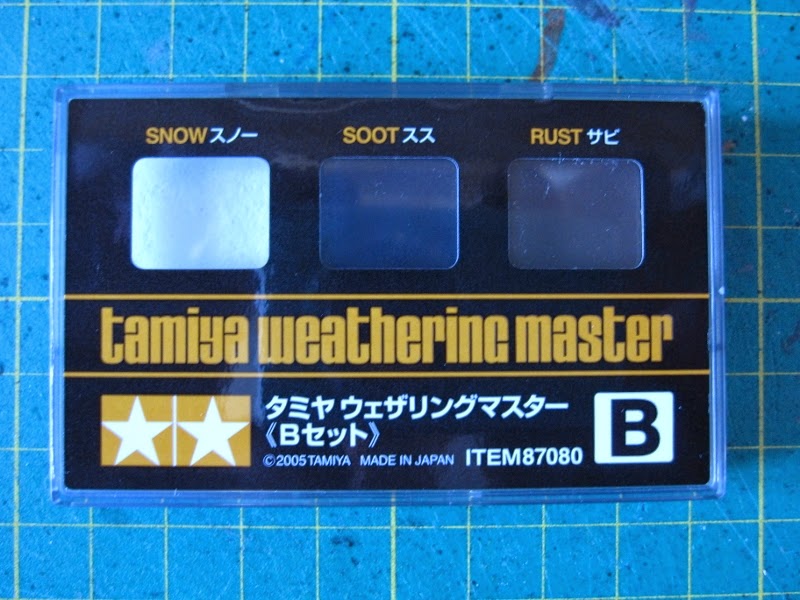 As you can see the coverage is good and it looks effective, the product itself  is quite strange as it has a waxy nature to it but it drys fine and I've not noticed any product transference to other parts of the model after touching, I'm not sure what I'll use the snow for but I can think of many applications for the rust, given that this product is labeled B its a fare bet that there's more to the range and I'll be looking out for them. 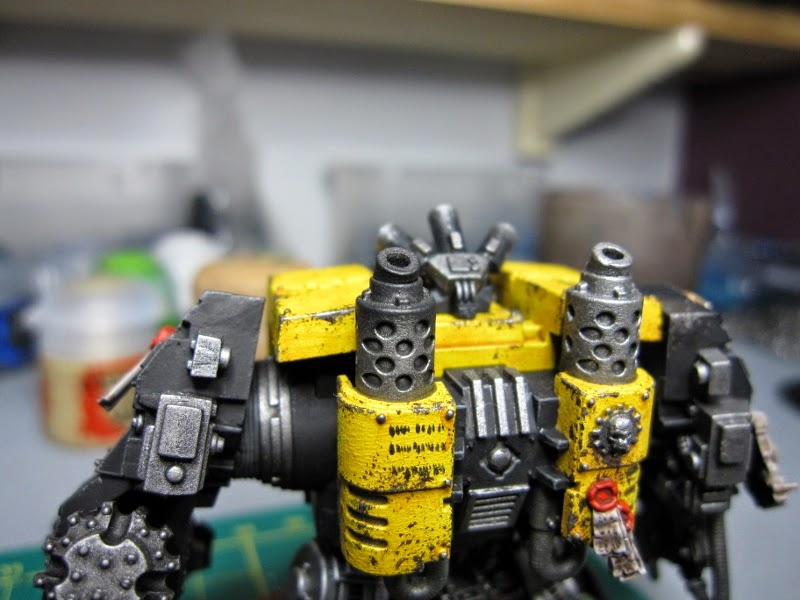 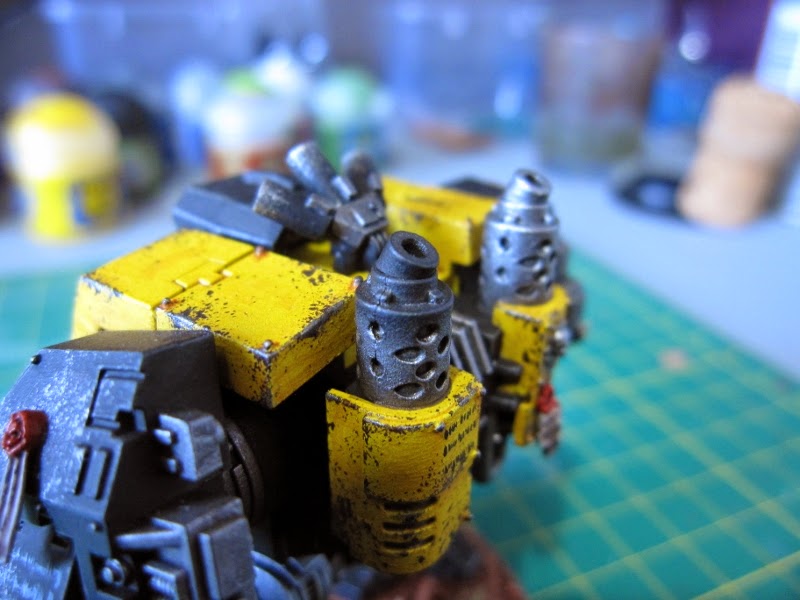 Hi guys, I've not posted for a while on hobby related things as I've been busy upgrading my tiny desk to a more spacious bench and it didn't cost me anything.
I had some MDF sheet left over from boarding out the loft and other bits n bobs which I had laying around the garage from past D.I.Y. job's, I'm pretty happy with the result. 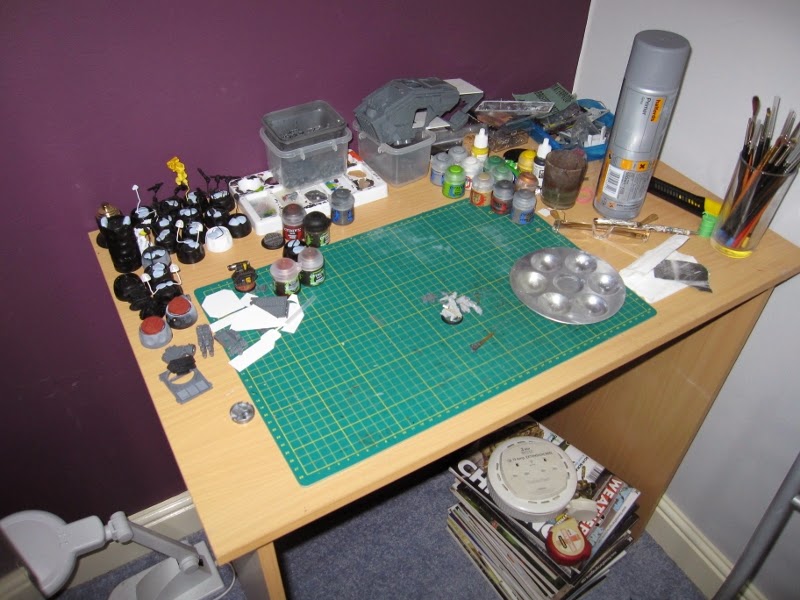 As you can see my work space just got too crowded, I never thought this hobby thing would grow so large!. 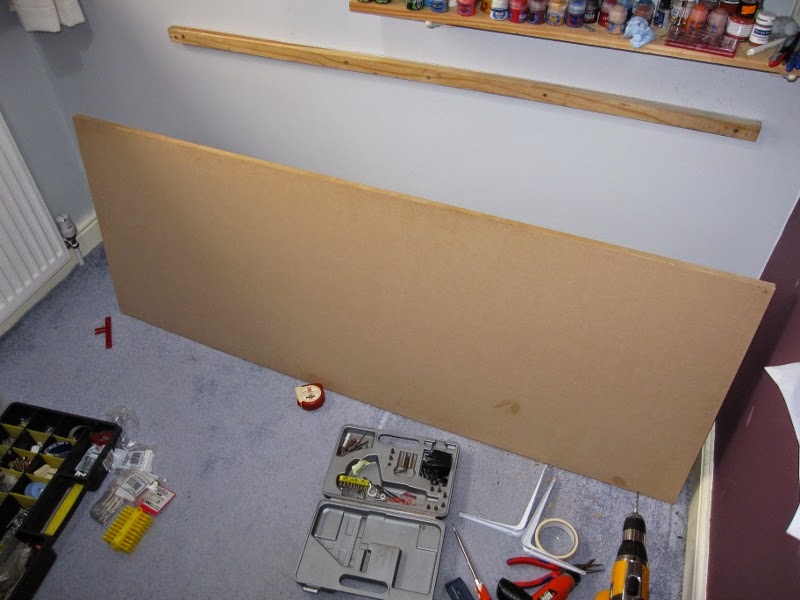 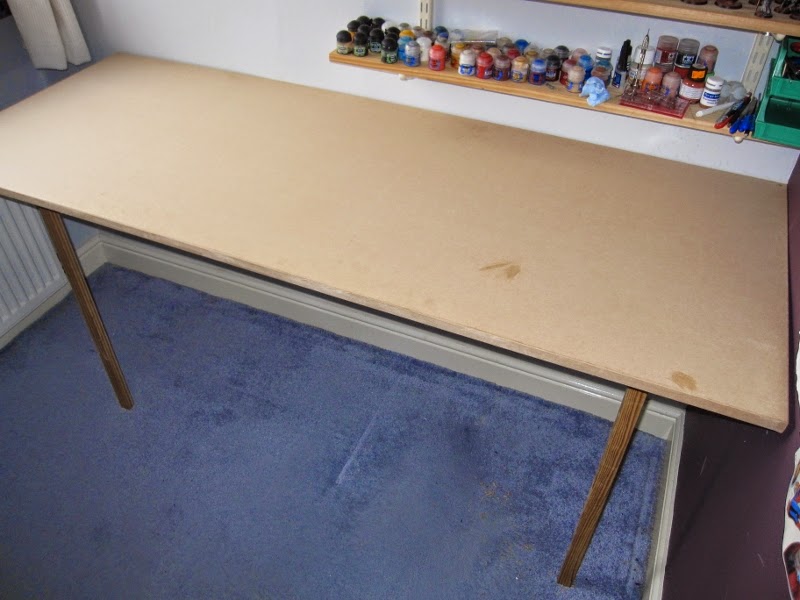 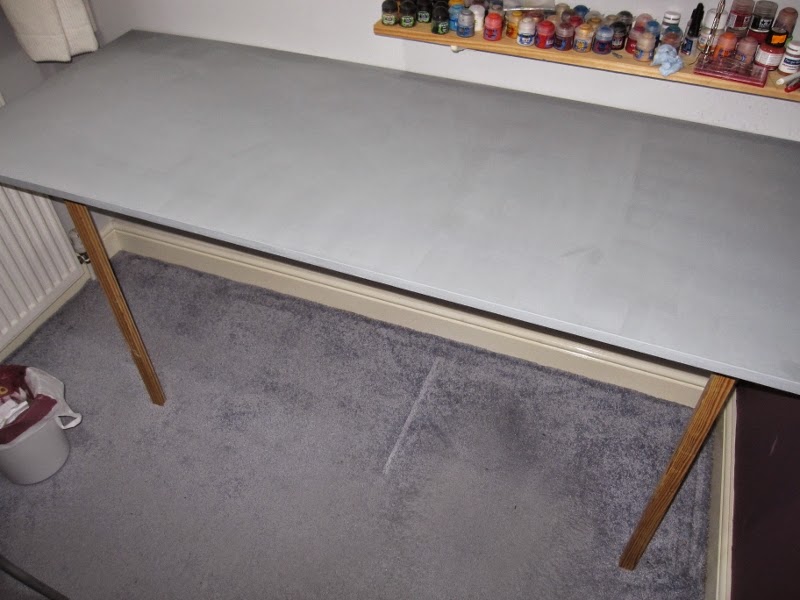 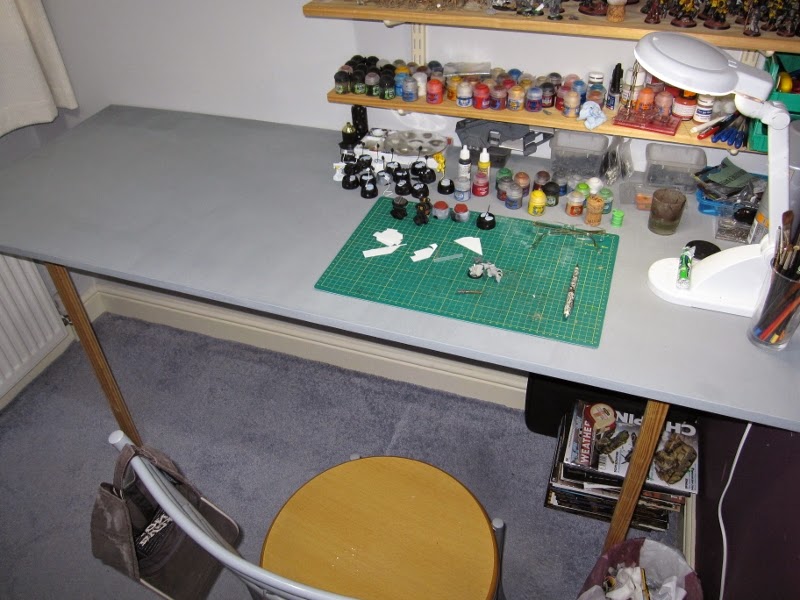 I'm looking to get an Airbrush set up on the bench just to the left of the cutting matt, I'll sort that out next year. Also I'm going to have to buy a more comfy chair, a nice padded one I think with the up and down function (don't know what that called,ha) so I can adjust the height. 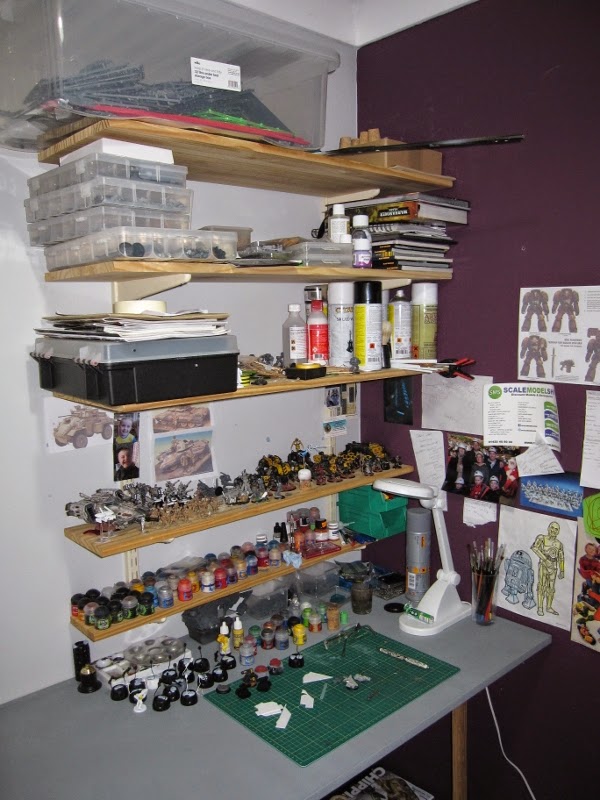 It's amazing how much stuff this hobby gets you buying, looks like I'll have to expand the shelves next.
Anyway guys as shown its really easy to build your own hobby bench, give it a go.
Posted by Jay188 at 3:01 AM 2 comments:

Well guys I've decided in 2015 I'm going to build and paint a new Scythes of the Emperor 1850pt army for general play and also for my second attempt at Armies on Parade, Yep thats right I'm planning it already!.

Anyway being as impatient as I am I've already started hacking away at the list, so first up a HQ kit-bash for the new army, I just love kitbashing mini's and Space Marines lend themselves to this art in a big way with what feels like an infinite choice of different combinations.

The model that I've built is Captain Romonos second only to Chapter Master Thrasius and Commander of Scythes first (and only) Battle Company, his stat line is the same as Cato Sicarius of the Ultramarines. 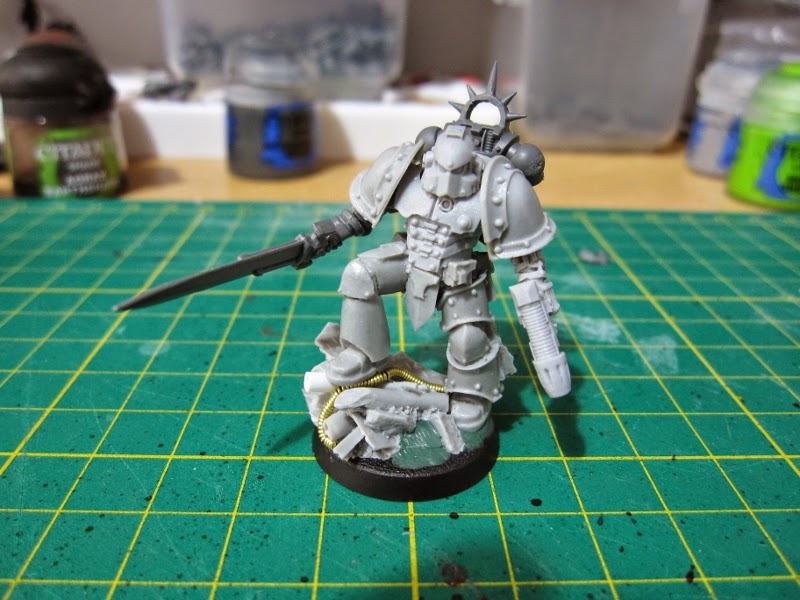 Styling wise I wanted Captain Romonos to look uncluttered but still have the feel of authority about him, given that the character model wears Artificer Armour and the Scythes scavenging shenanigans I've gone ahead and used the Forge World Legion Champion body but carefully removed the torso and added an Iron Hands MKIII one in its place, I think this gives the impression of  a mish mash of armour styles but also one of quality.

I chose this Power Sword as I've been wanting to use this part for a while (it's from the "Assault on Black Reach" box set)  I love it's simple unfussy shape and think it fits right into the chapter and also the character of the miniature itself.

The helmet is a Forge World part from a Destroyer Squad, the pack is off a Blood Angel Death Company sprue, the base detail which I've added to slightly and the shoulder plates cybernetic arm and plasma pistol are all Forge World parts, incidentally don't forget to add the gun hilt when gluing your pistols to arms/hands, little details and all that. I've also added a couple of grenades around the back of the mini and are considering sticking the Imperial Laurel to one of  his shoulder plates. 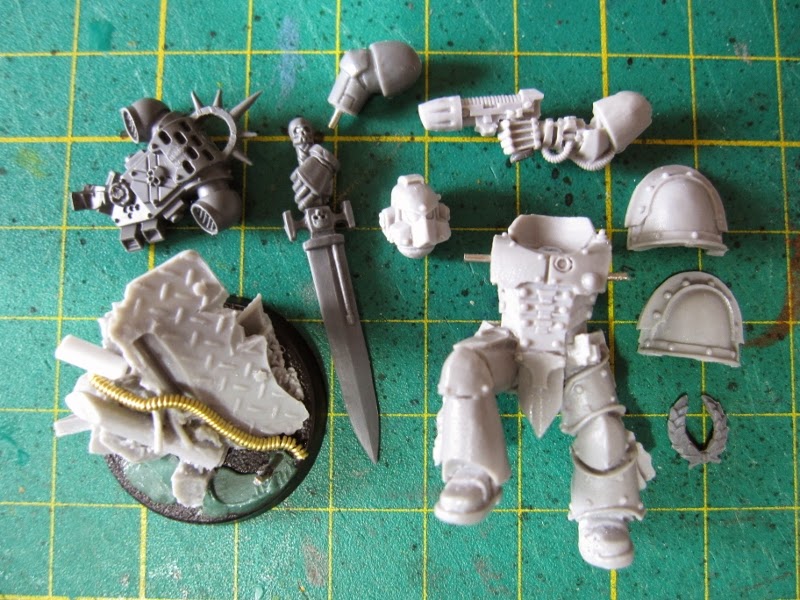 Anyway guys I thought I would show you a photo of all the component parts before its stuck together, as you can see I've used five pins on the model, two on both the base and torso and one on the power sword wrist area.

I'm looking forward to cracking on with this mini and will post up picks when its finished.
Posted by Jay188 at 11:23 AM 2 comments: