Hi guys, Hope your all having a great Christmas and got all the plastic/resin hobby stuff you wanted. 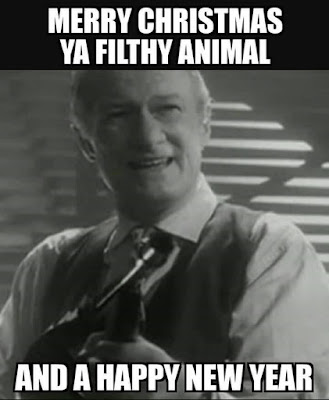 I was given the Bloodbowl game with it's Death Zone supplement....get in!, Not ever played or even bought this before in any of it's earlier formats but I hear great things and love to watch gridiron, go Seahawks!! or something like that, so looking forward painting up the miniatures and kicking some human ass on the field.

Thinking on a tad there could be some Orkland Raiders making an appearance on these pages sometime soon., Going to have some fun with this. 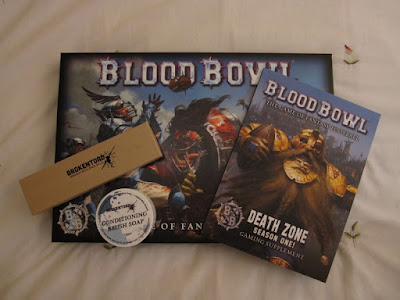 I use Series7 brushes for the most part with my painting, But after looking around some random hobby shop a month or so ago and commenting to my good lady about these beautiful brushes from Broken Toad she sneakily bought and hid them away for crimbo, Never had brush soap before always washed them out in water so that's new to me but I'm sure I'll work it out.


Anyway guys enjoy the rest of your Christmas I'm off to play with the kids PS4....lucky little dudes.
Posted by Jay188 at 1:49 AM 4 comments: 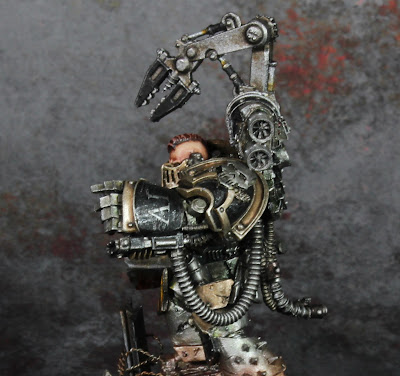 Pretty chuffed with this little fella, Love the way his understated size blends in with his brethren but are still left in no doubt of his authority. 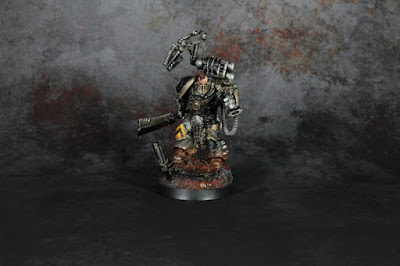 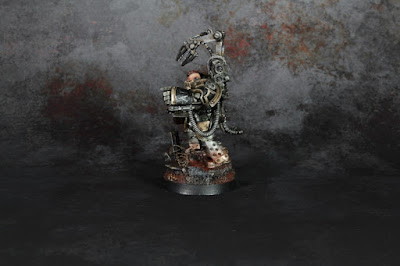 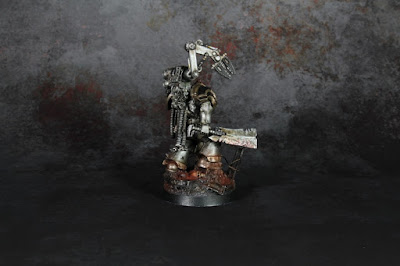 First time I've used blood effects on a model, I mixed some Tamiya red clear with Vallejo black and waited for it to dry a bit so it went a little gloopy, Not sure if it looks that great but it breaks up the steel colour of his hand weapon so it will do for me.


The hair colour was my third attempt and one I'll be sticking with, The first two, grey and brown, were both kind of  dull against his silver armour....so there we are red(ish) hair. 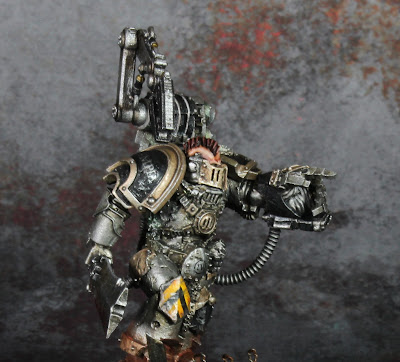 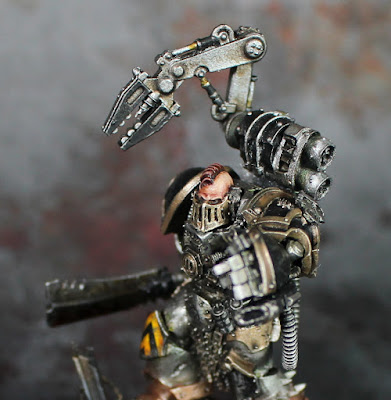 Hi fellas, Well I've wanted this big guy for a while and just like mt Leviathan I'm going to Iron Warriors the hell out of it.


I hear alot of grumblings about the aesthetics of this miniature the way that the front sticks out all boat like, well I'm not so bothered sure it could of been a tad more Contemptor like but hey embrace the difference i say. 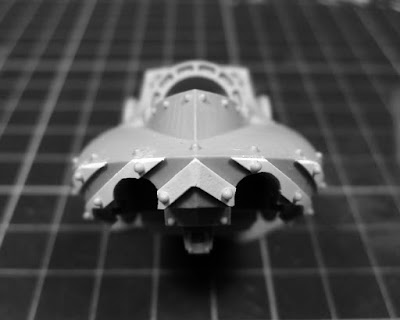 Not done a great deal on it so far, Thousand Sons keep calling me....got to do something with all those B@C marines, but like i said with my Leviathan I'm adding extra armour which also adds to the IW's look, This time though rather than using old yogurt pot for the plastic stripes I've invested in some plasticard, getting more professional by the day lol, Still using Zinge Industry's rivets though, Great buy those. 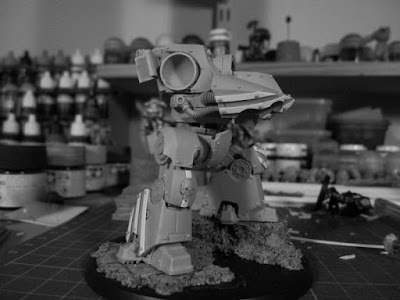 For it's armament I've opted for but still waiting on the pre-order, The awesome Arachnus Heavy Lascannon battery with Aiolos launcher, Will be magnetizing the Launcher in anticipation of that field generator, or might kit bash my own not decided yet. 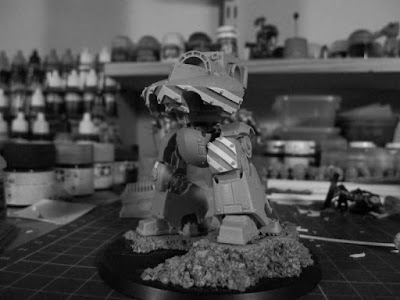 I'm happy with how it's going so far and plasticards so much easier to work with than yogurt pot..... no shit fella. 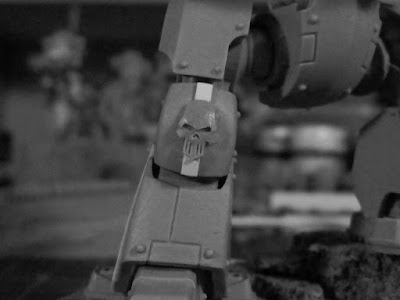 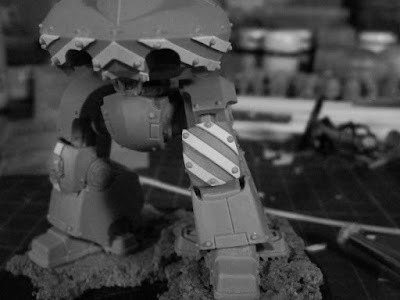 Anyhow that's all I've done on him so far, Not sure with Xmas coming up that I'll get a lot of time to spend on him but yeah sooner rather than later hopefully.
Posted by Jay188 at 4:25 AM 8 comments: 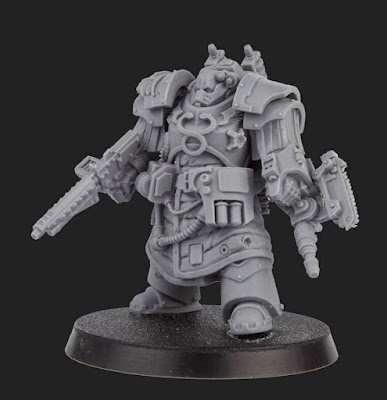 Weapon load out looks like a Needle Pistol and a Narthecium Gauntlet, The miniature looks a little static but overall i rather like it, Strange that the release date is the 27th Dec which is a Tuesday the day after Boxing day...well maybe not that strange after all...kerching!!
Posted by Jay188 at 1:13 PM 2 comments:

Hi fellas it's been a while, tut tut anyhow i thought i would show you what I've been up to.


Weathers playing havoc with priming outdoors right now but I've found that if you warm the tin up on a radiator for 5 to 10 min's you get a little time for a good smooth finish.


Anyway top tip out of the way so lets get on with the miniature, I've been wanting to build and paint a badass Warsmith to lead my force of brutal Iron Warriors for a while and was just waiting of the perfect base miniature to turn up from either GW or FW, I was thinking of using Alexis Polux which i bought for the kitbash but even though he's a awesome mini he's been used/kitbashed so many times. 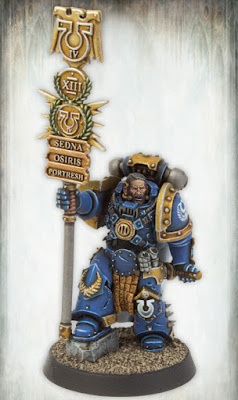 So then Games Workshop came up with the goods with their second Forge World miniature to be sold in their store, The Ultramarines Herald i thought fitted the bill perfectly just had to remove those U's and away i go. 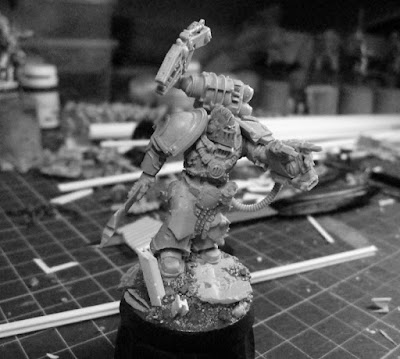 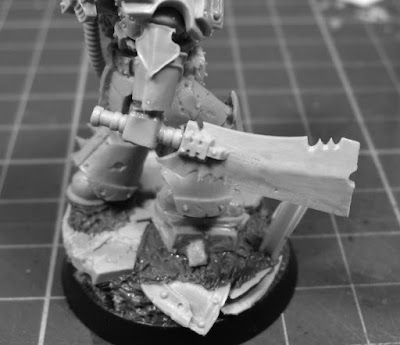 The Polux kit didn't go to waste, I used his arms, shoulder pads and power fist, I also used a Techmarines Back pack and servo arm plus some tubing, A Volkite weapon and a World Eaters large chopper (brutal) as his close combat weapon, the head is from the FW tank upgrade kit. For the base i just used various bit n bobs i had laying around on my bench. 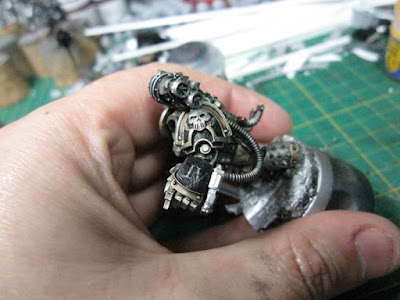 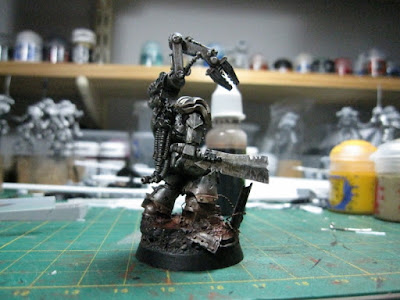 So then nearly there with this just got the head to do....skin tone drat!! not looking forward to that...well I'll see how i get on with it. Anyhow i hope you like it so far guys and i should have him all done before too long.